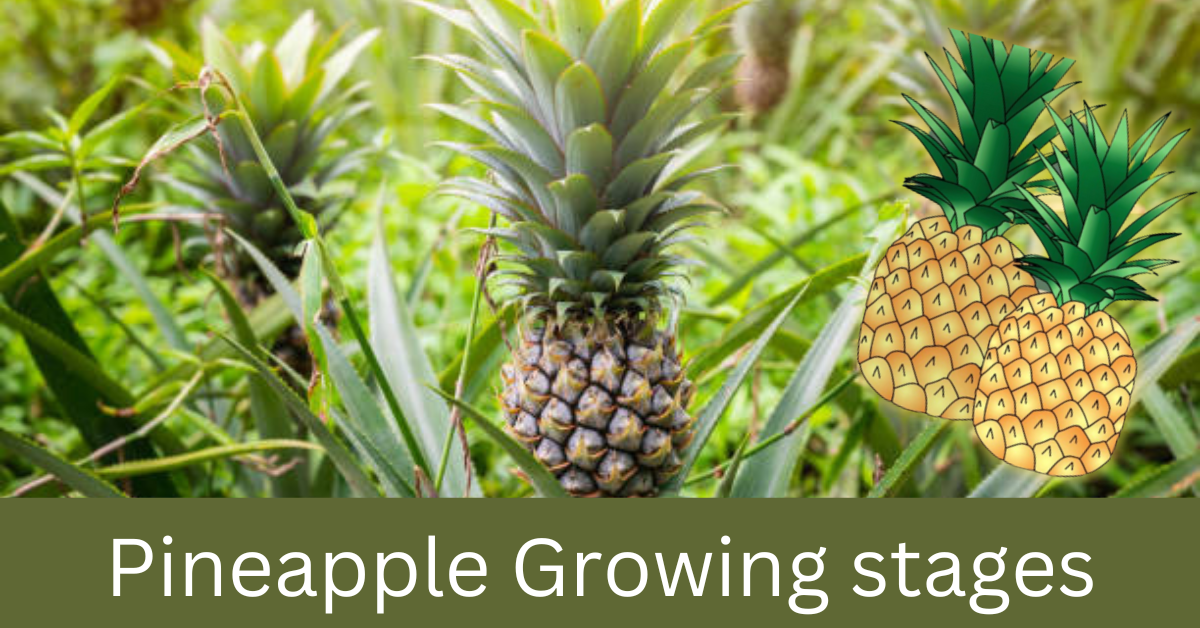 The pineapple is a fruit plant belonging to the bromeliad family of blooming plants. Spanish moss and desert succulents are also part of this family. The pineapple or Ananas comosus are native to the tropics. In This article we talk about pineapple growing stages.

In order for you to be able to better care for the plants, it is important to first understand the phases of the plant’s life cycle. So let’s start from the seed and explore what occurs at each stage of the pineapple’s development all the way to its becoming a fruit.

Seed Germination is the first part of pineapple growing stages. For pineapple seeds to germinate, it takes about 6 months. First the cotyledon will start to grow, followed by the radicle cells becoming active and from the cotyledonary membrane, the plumule develops.

The splitting of the testa at the seed’s pointed end is the first sign of germination. The embryo’s radicle end will begin to arise at this time. You may even notice a little bump on the upper surface where the embryo is growing.

While the plumular growth point pushes through the cotyledonary membrane, the radicle will proceed to develop rapidly and turn downwards. Also, the little plumular leaves will emerge and start to turn green. The vascular tissue will also start to grow and begin extending through the majority of the cotyledon.

About seven weeks after sowing, the primary root will begin to appear. Adventitious roots will grow from the base as the sprout gets two or three leaves around the time they are 2 months old. Also, the primary root doesn’t function and withers away at this point.

Although the stem will remain short, during this stage, the size and number of leaves and roots will increase. It is true that the seedlings do not change that much on the outside, however, much significant development is taking place inside.

About three months into the life cycle, the young independent plant will develop six plumular leaves and a short stem. Also during this phase, the plumule leaves and adventitious roots will keep growing.

The stalk elongates and enlarges toward the ends during flowering. They produce a head of tiny flowers that are purple or scarlet. Each of these flowers have red, yellowish or green rosettes.

As the stalk continues to grow and at its tip forms crown or top. The crown is a bunch of dense and stiff short leaves. It is common for the plant to produce around two or three heads. However, in some rare cases, as many as 12 heads can be developed by these plants.

There will be a cluster of 100 to 200 flowers with the main flower. Each of the flowers will have three fleshy sepals and petals. They will also have six stamens and a three part overy. The individual flowers will combine to form a fruit. On average, this cone shaped, complex, luscious meaty fruit will be about 12 inches long.

From the stem, the fibrous yet succulent core is produced. It takes about 4 to 5 months after initiation for the fruit to mature.

As the offshoot is formed from the stem around the base of the fruit, the shoots emerge from the leaf axils. The shoots that grow from the base at ground level are suckers. Later on from the stolons beneath the soil eventually emerges basal suckers.

Pineapples will not produce seeds even if pollinated as they are self-sterile. Although there happens to be some wild variants that do produce seeds, in most cases there will only be traces of developing seeds.

Parthenocarpy is the formation of fruits which lack seeds.

In order to generate seeds, pineapples need cross-pollination. Since all of the variations would be genetically similar, the pollen transfer in a commercial field from one plant to another is termed self-pollination.

Pineapples are not able to pollinate by wind due their pollen being sticky. Therefore, pineapples depend on hummingbird, honey bees and pineapple beetles to normally help with the pollination process.

Also sexual reproduction is very uncommon. That is because the rate of germination is very slow.

Vegetative is the easier way to propagate pineapples. That means a new plant will grow from a section of plants that are already existing. The four parts that can be used for propagation are crowns, slips, suckers and shoots.

That’s the growing stages of pineapple . Therefore, you are able to grow your own pineapples from scraps without too much work. However, you will need to have much patience during the process.